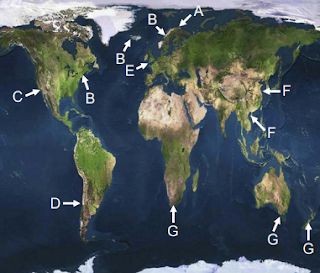 France and Iceland. Laminaria hyperborea is mainly from Norway, the United Kingdom, Ireland, and France. Lessonia is principally from Chile. Macrocystis pyrifera is from the United States, Mexico, and Chile. Ascophyllum is found in cold waters of the Northern Hemisphere. It grows in the eulittoral zone, forming distinct bands of dark brown, branched plants 1–4m long. It prefers somewhat sheltered areas and disappears where there is strong wave action. Durvillaea is found only in the Southern Hemisphere and grows best in rough water, near the top of the sublittoral zone, on rocky shores or offshore reefs. Plants are smaller where summer water temperatures rise to 19°C, but grow best where the temperature does not rise above 15°C. There are three main species of Laminaria seaweeds, i.e., L. digitata, L. hyperborea, and Laminaria saccharina. All three grow in cold temperate water between 10 and 15°C, and are harvested in the Northern Hemisphere. L. digitata grows in the upper sublittoral zone in rocky, wave-exposed localities, and it is well adapted to this because of its flexible stipe and divided blades. In France, L. digitata is the main raw material for the alginate industry. L. saccharina often grows in close association with L. digitata, and is sometimes harvested at the same time. In Norway, L. digitata grows in masses at the lower end of the eulittoral zone and was previously an important source for the Norwegian alginate industry. In France, it is in the upper sublittoral zone and is harvested around the coast of Brittany and northern city of Dalian, probably by shipping. Prior to that, China had imported its needs from the naturally growing resources in Japan and the Republic of Korea. In the 1950s, China developed a way of cultivating S. japonica on long ropes suspended in the ocean, and this became a widespread source of income for large numbers of coastal families. By 1981, they were producing 1,200,000 wet tonnes seaweed annually. In the late 1980s, production fell as some farmers switched to the more lucrative but risky farming of shrimp. By the mid-1990s, production had started to rise and the reported harvest in 1999 was 4,500,000 wet tonnes. Although much of these cultivated seaweeds are used for direct food consumption, they also provide a strong foundation for the thriving alginate industry in China. 1.3.2 Red Seaweeds 1.3.2.1 Carrageenan-Bearing Red Seaweeds Red seaweeds are used for the production of carrageenan and agar. When carrageenan was first discovered in Ireland, it was first found in the red seaweed Chondrus crispus, commonly known as Irish Moss, which can be collected from natural resources in Ireland, Portugal, Spain, France, and the east coast provinces of Canada. As the carrageenan industry expanded, the demand for raw material began to strain the supply from natural resources, and in the early 1970s, Chondrus was being supplemented by species of Iridaea from Chile and Gigartina from Spain. Fig. 1.5 offers a schematic illustration of C. crispus. The cultivation of species of Eucheuma in the Philippines during the 1970s provided the carrageenan industry with a much enhanced supply of raw material. A further advantage of this cultivated material was that one species contained almost exclusively a particular type of carrageenan, i.e., kappa-carrageenan, while a second species contained
Responsive Ad Here
Tags: food, Workout

Get more nice stuff
in your inbox

instantly by Subscribing to us. So you will get email everytime we post something new here

We guarantee you won't get any other SPAM